← Lightning Thunderstorm Over North Boulder Colorado
A Forest Of Dreams → 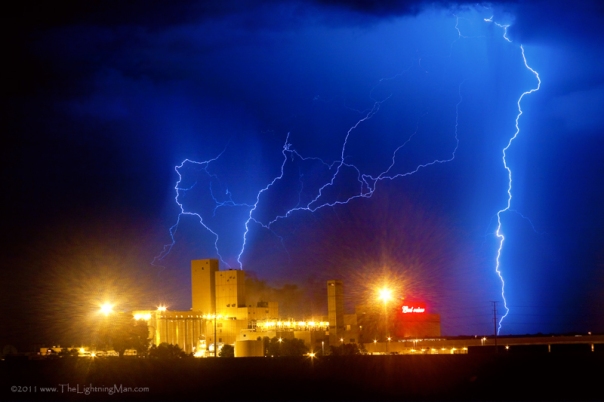 Budweiser Power – Massive Lightning Thunderstorm all over the Anheuser-Busch Budweiser Brewery.  This was one crazy amazing storm.  I chased this very erratic lightning thunderstorm all the way to Wyoming.  It was sooooo crazy at one point I would hit my shutter button then jump in the back of the SUV to get my feet off the wet ground.  This is one of mnay images in this series. This is two images layered to keep the noise low, equal to a 30 sec exposure, f11, 75mm, ISO  100, WB tungsen.   Look for more in the gallery.  Custom prints available online: Budweiser Thunderstorm Power

Lightning fact:  Benjamin Franklin (1706-1790) endeavored to test the theory that sparks shared some similarity with lightning by using a spire which was being erected in Philadelphia. While waiting for completion of the spire, he got the idea to use a flying object such as a kite.

During the next thunderstorm, which was in June 1752, it was reported that he raised a kite. He was accompanied by his son as an assistant. On his end of the string he attached a key, and he tied it to a post with a silk thread. As time passed, Franklin noticed the loose fibers on the string stretching out; he then brought his hand close to the key and a spark jumped the gap.

Chapel on the Rock

← Lightning Thunderstorm Over North Boulder Colorado
A Forest Of Dreams →