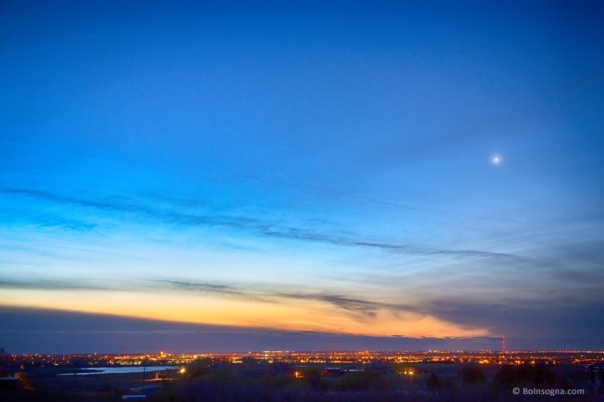 An early morning view of Longmont Colorado City lights looking east before the sunrise with a bright view of Planet Venus in the sky. The sky’s brightest planet is very prominent in the eastern predawn and dawn sky throughout April.

Here are some facts about this planet.  Venus, is the second planet from the sun and is named for the Roman goddess of love and beauty. The only planet named after a female.

A day on Venus lasts longer than a year: It takes 243 Earth days to rotate once on its axis. The planet’s orbit around the Sun takes 225 Earth days, compared to the Earth’s 365.

Venus is often called the Earth’s sister planet: Earth and Venus are very similar in size with only a 638 km difference in diameter, Venus having 81.5% of the Earth’s mass. Both also have a central core, a molten mantle and a crust.

Venus rotates counter-clockwise: Also known as retrograde rotation. A possible reason might be a collision in the past with an asteroid or other object that caused the planet to alter its rotational path. It also differs from most other planets in our solar system by having no natural satellites.

Venus is the second brightest object in the night sky: Only the Moon is brighter. With a magnitude of between -3.8 to -4.6 Venus is so bright it can be seen during daytime on a clear day.

Atmospheric pressure on Venus is 92 times greater than the Earth’s: While its size and mass are similar to Earth, the small asteroids are crushed when entering its atmosphere, meaning no small craters lie on the surface of the planet. The pressure felt by a human on the surface would be equivalent to  that experienced deep beneath the sea on Earth.

Venus is also known as the Morning Star and the Evening Star: Early civilizations thought Venus was two different bodies, called Phosphorus and Hesperus by the Greeks, and Lucifer and Vesper by the Romans.

Springtime In the Southwest Desert